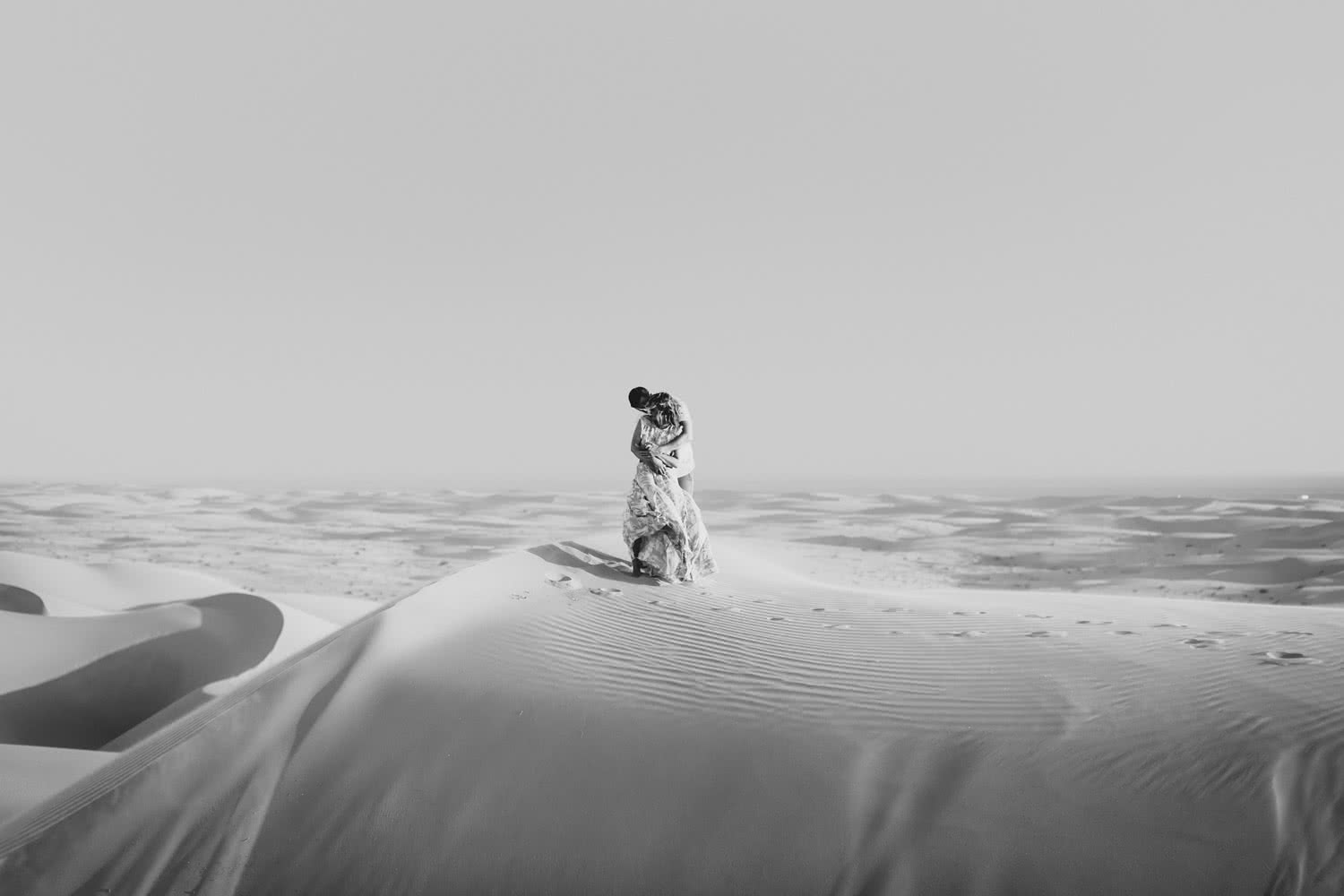 Amber reached out to me a few months ago to inquire about some unique engagement photos. After chatting on the phone, Amber asked if I knew of any locations that would resemble the desert scene of Spectre for the backdrop of their session. My mind immediately drifted to the abandoned rail yard of Jacumba and the surreal Glamis sand dunes.

Amber and Jason were excited by the idea, and were immediately on board. We decided to throw the dunes into the mix as well with a smoke bomb rally as the grand finale.
Abandoned Trains of Jacumba

With Andrew riding along for assistance, our car caravan headed out to no man’s land. Turning down Rail Yard Way in Jacumba, you start to feel the back of your neck crawl.

We pulled off the road to park in the dirt behind the wooden trains. Not a minute later, a police officer rolled up beside us. I thought he was going to send us packing. Instead, he asked if we were the ones responsible for the earlier gun shots (?) He looked bored by our ‘no’ response…then he left us in peace to shoot. How very perplexing.

We climbed into the wooden trains which, to my surprise, were swept clean since my last visit. Thank you, stranger. 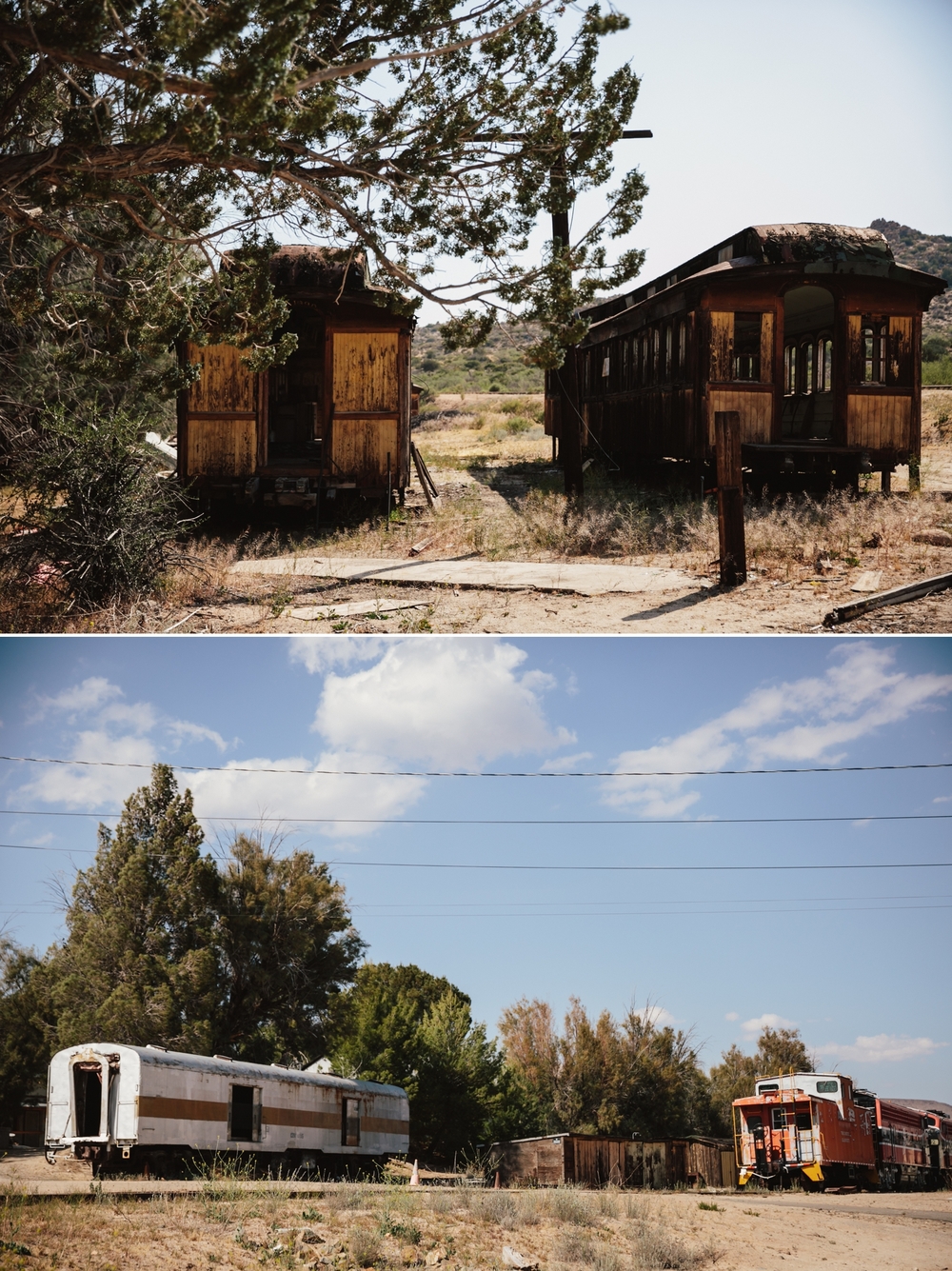 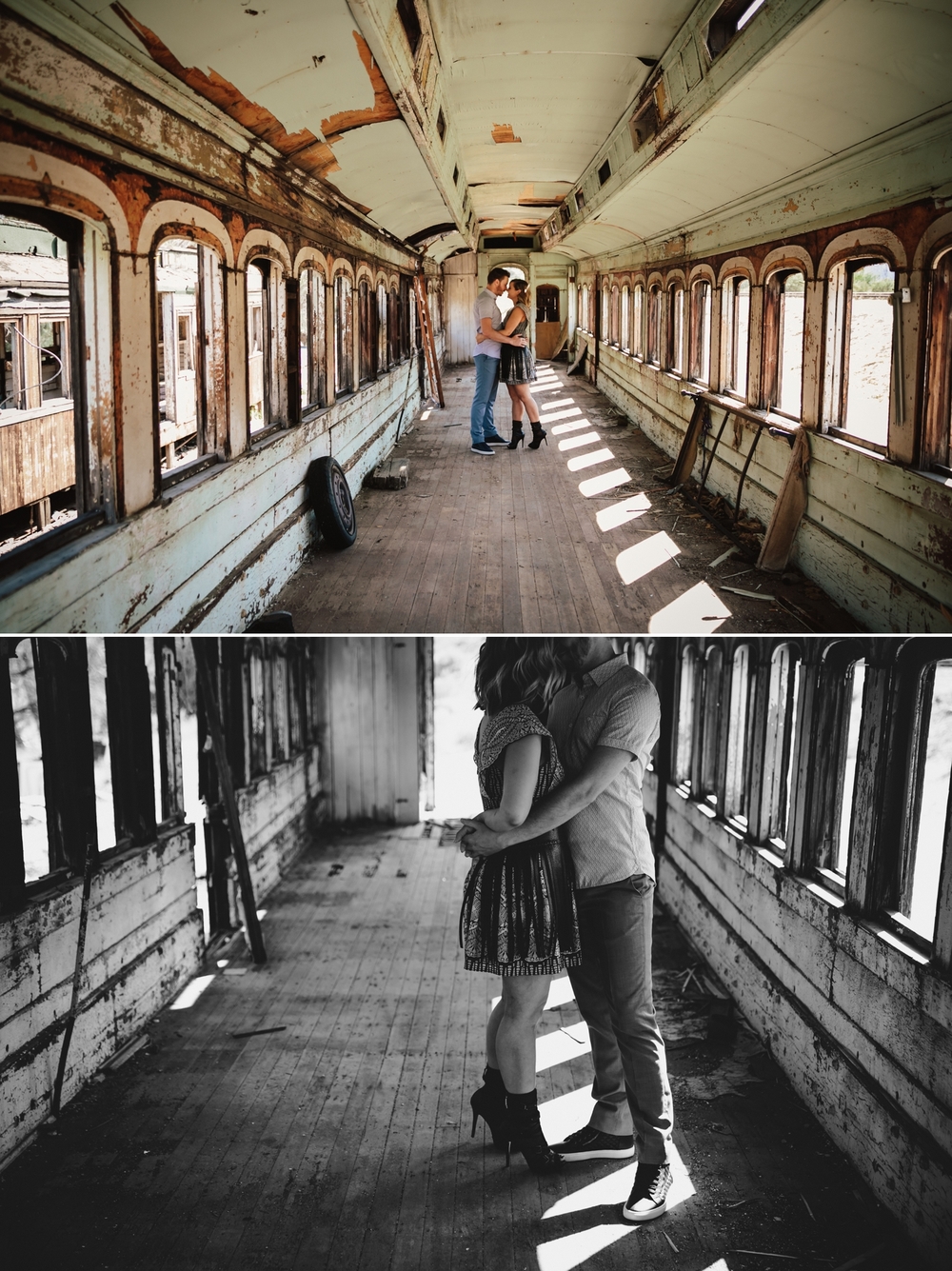 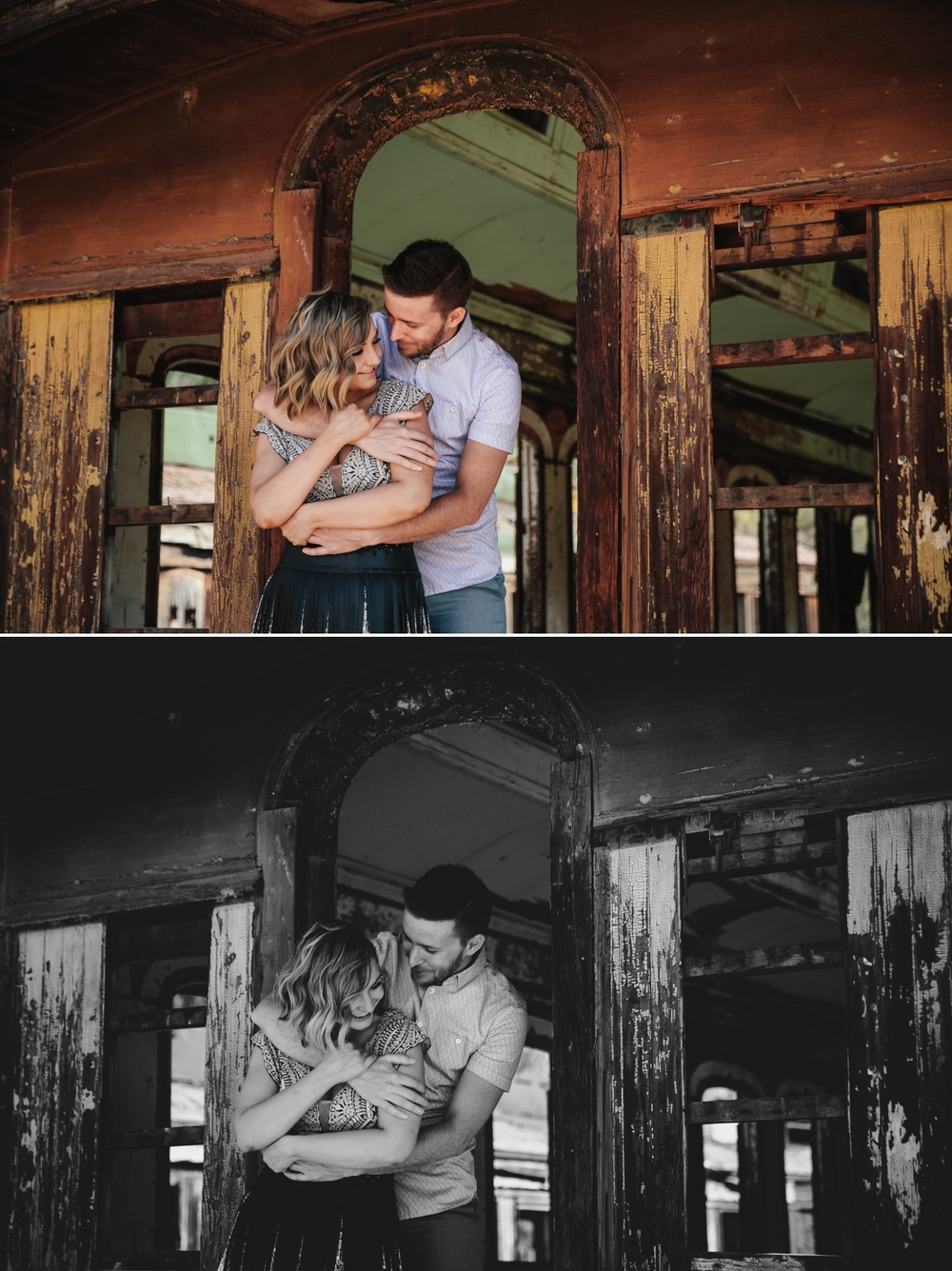 Jacumba is a funny place, with some interesting inhabitants. The “Institute of Perception,” a group dedicated to “the evolution of the human spirit through the arts,”  owns most of the abandoned buildings and structures in the area, including the train cars. They all display prominent, hand-painted private property signs. (I have a strong inclination this is to deter hoodlums, graffiti artists, and squatters). 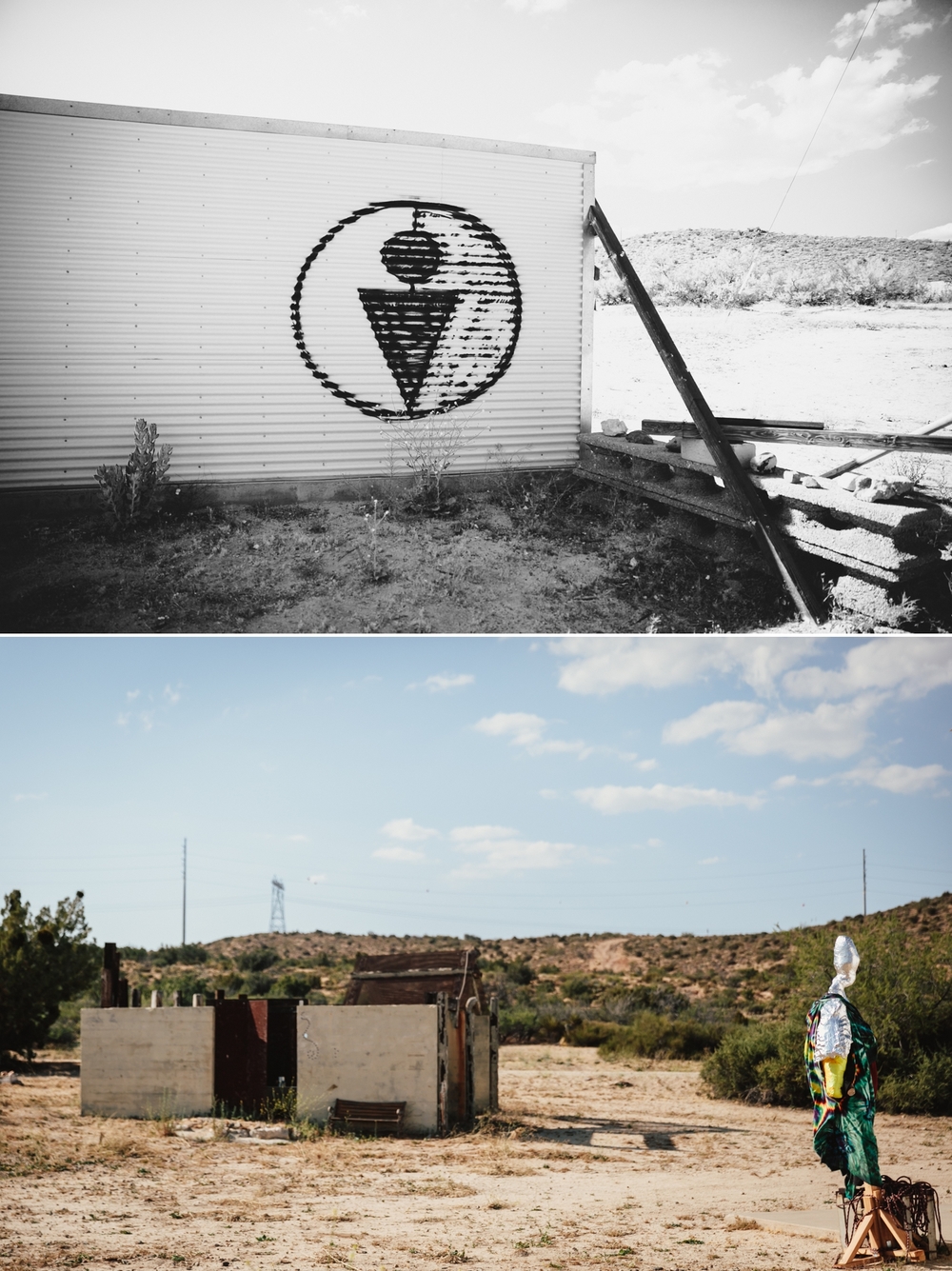 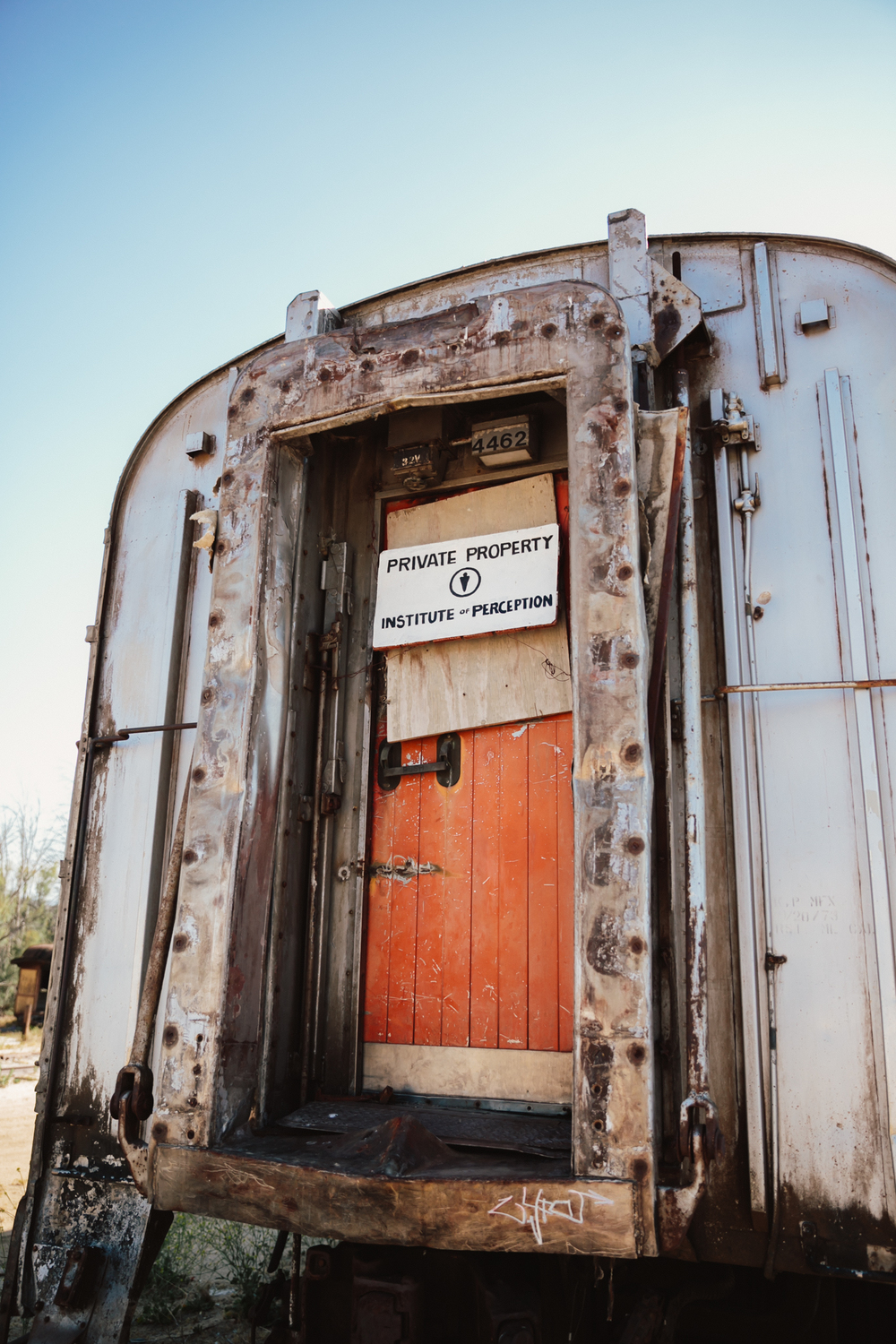 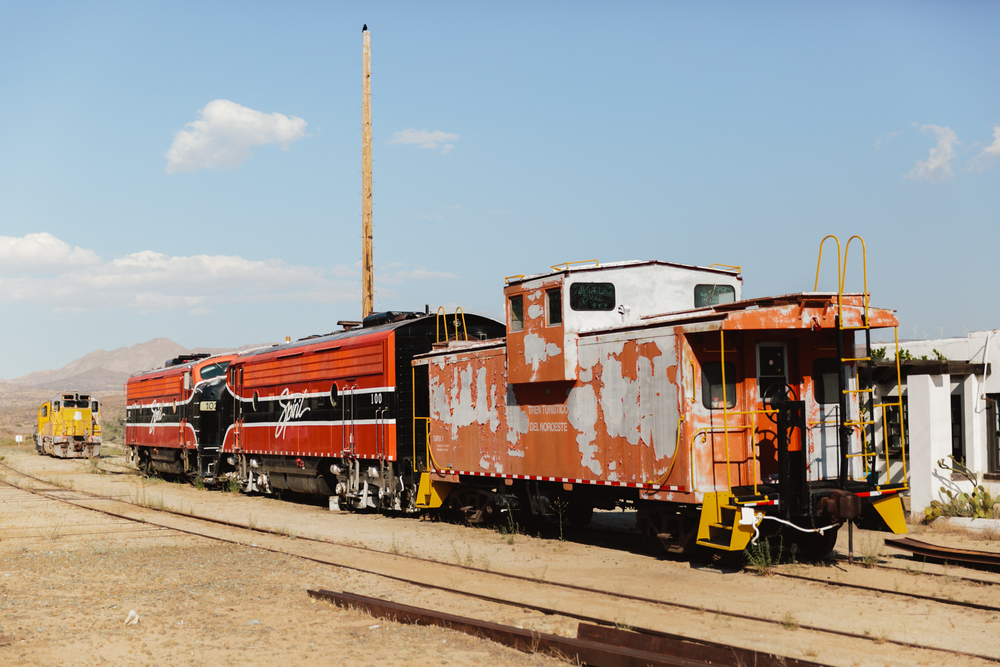 Since my last visit to the rail yard, one of the red metal car doors had been pried wide open, revealing the engine room inside! With help from my trusty step ladder that never leaves my trunk, we scrambled inside.

A skylight from the roof sent light and shadows dancing across the room. It was the perfect opportunity to use a spare can of Atmosphere Aerosol for some faux-fog drama. The combination of light and fog cradled these two within the most spectacular lens flares.

We tried our luck with the next car over, a passenger car with seating, but the room was chain linked shut. Given the extension cable running the length of the floor,  the “Institute of Perception” was likely doing some remodeling to the inside. 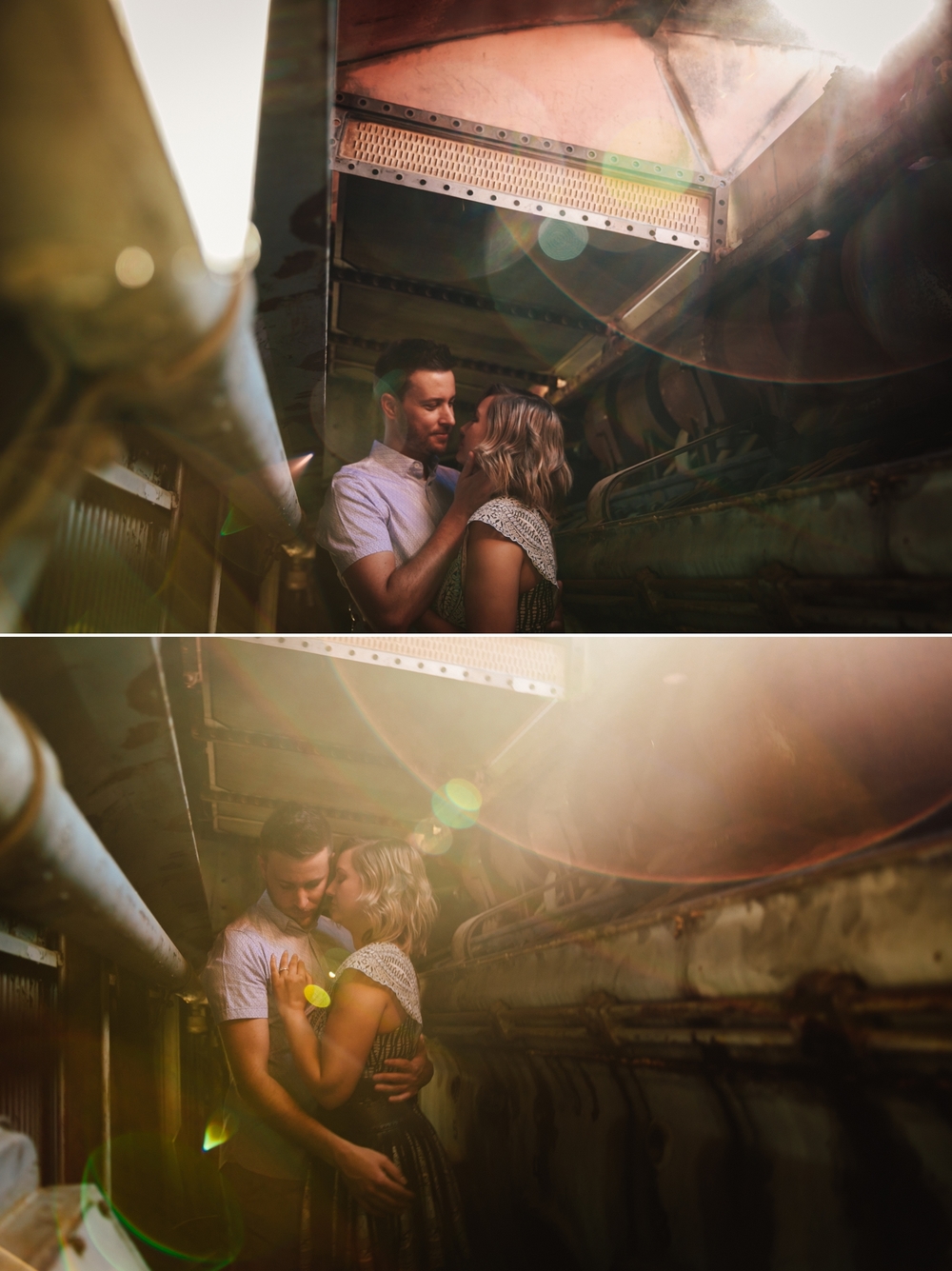 There was one last car in the rail yard that really caught our eyes. A metal steam engine car with an upper deck you could hoist yourself up on to. The rusty car looks like it belongs in a Thomas the Train Engine story book (only missing the bright paint and a smiling face).

Sunset at the Glamis Sand Dunes

After our fill of exploring the rail yard, we packed the car caravan again and settled in for the drive out to the dunes.

We arrived just in time for the beginning of golden hour. Because of the strong winds at the Glamis sand dunes, the landscape changes every time I visited. Many of the rolling dunes had shifted shapes and placement.

It was windy this time, tousling our hair and blowing sand into our eyes. The sand glowed gold in the setting sun as it lifted off the peaks of the dunes. 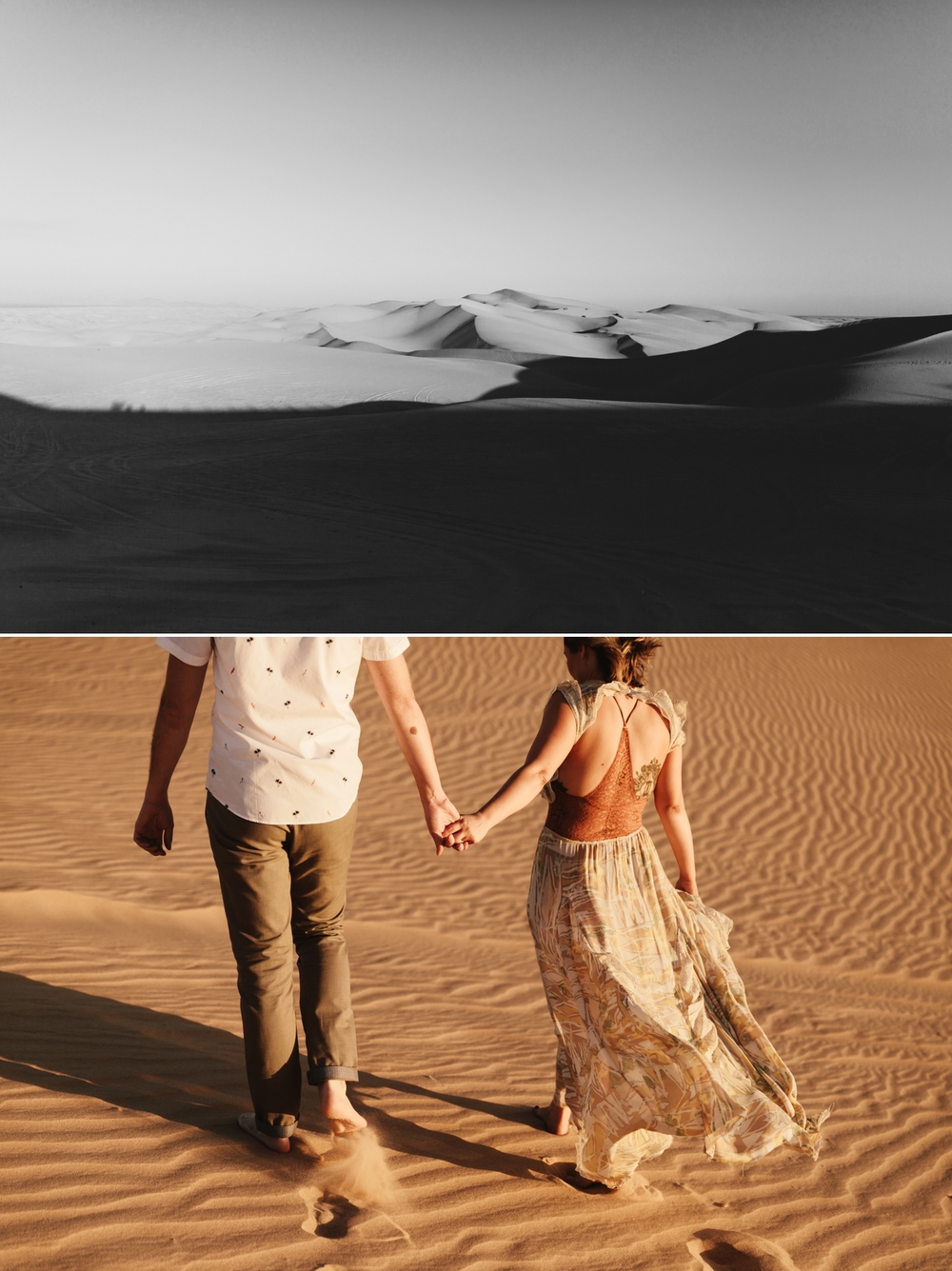 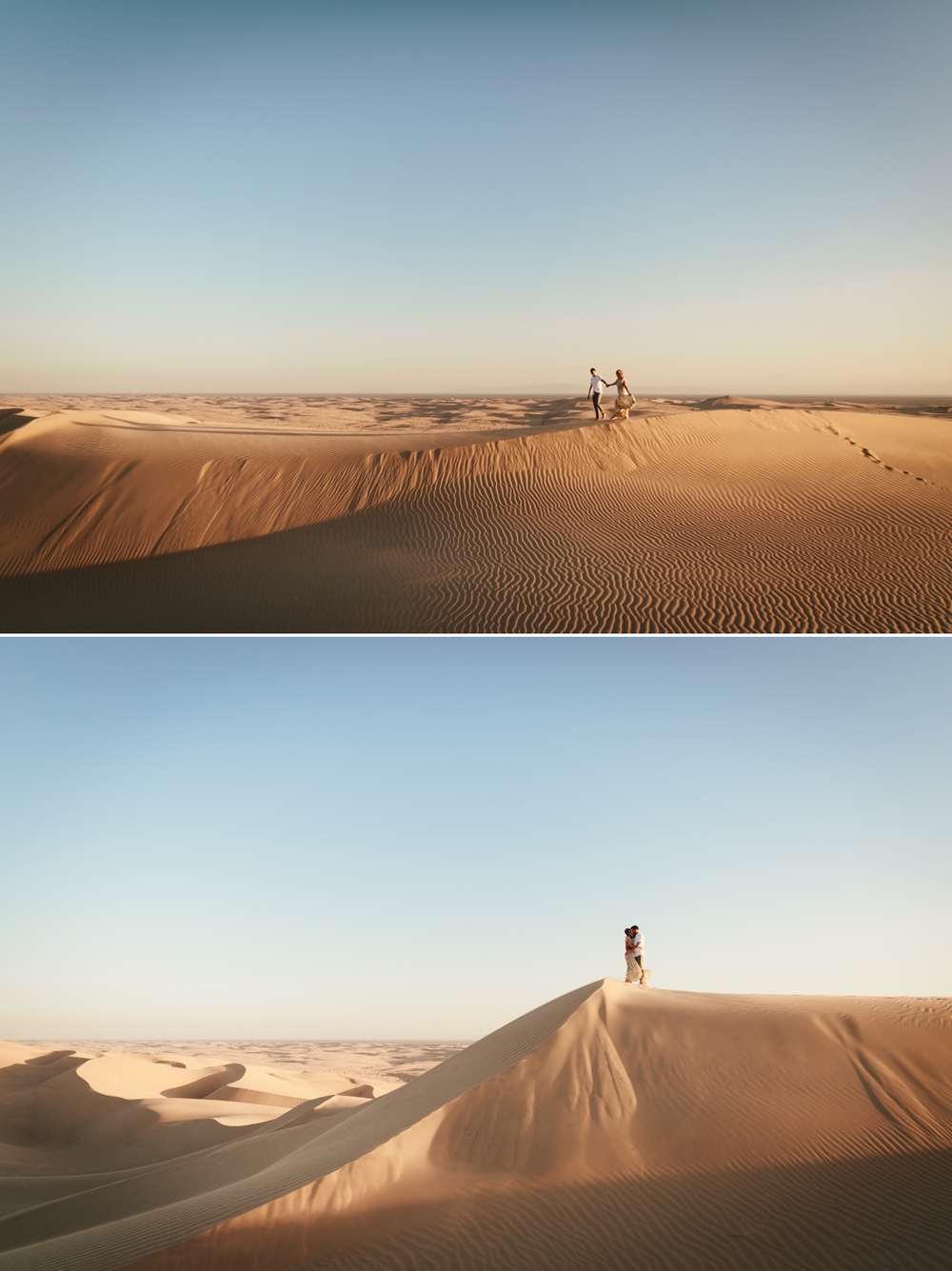 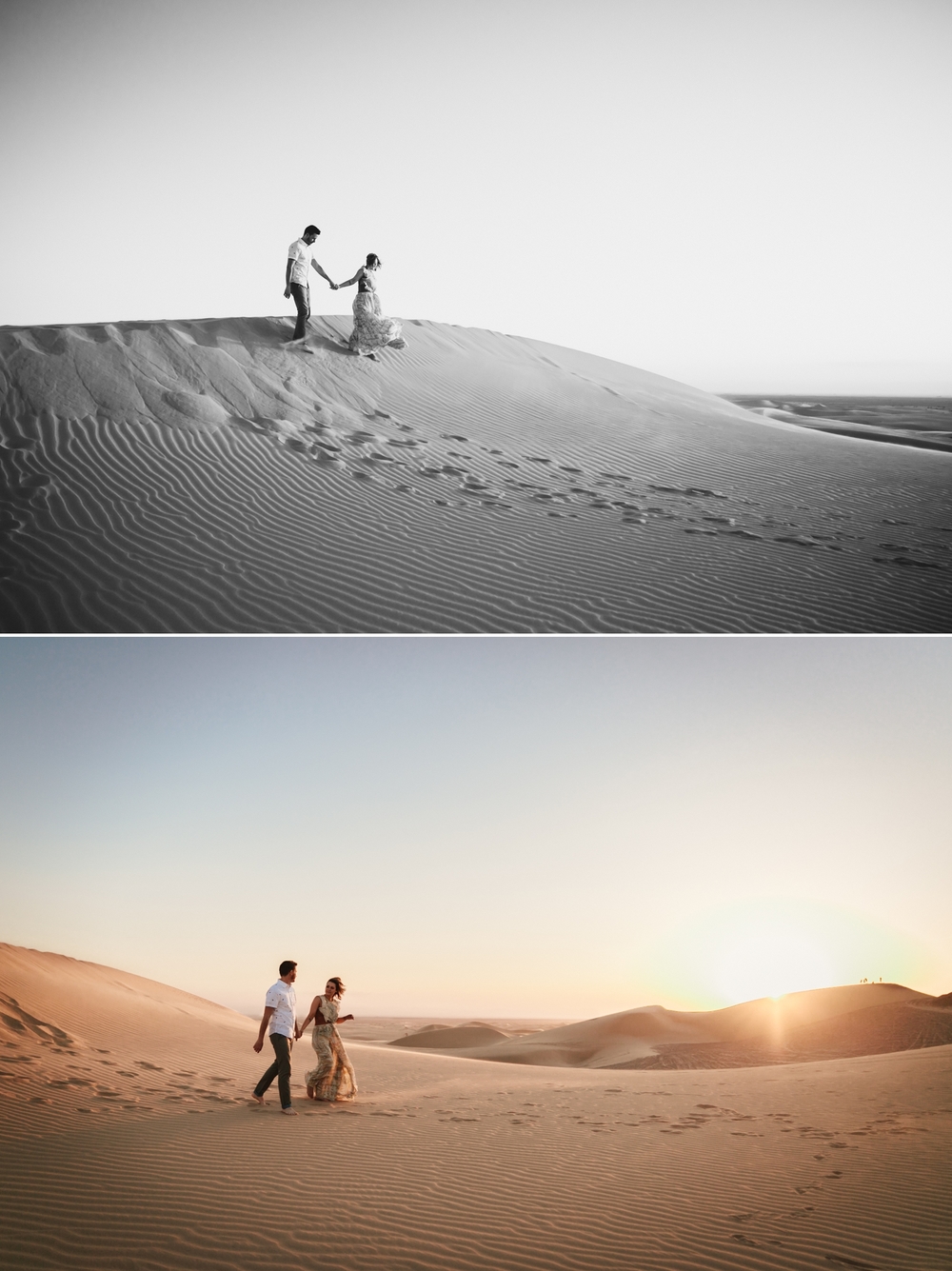 Smoke bombs in the Desert

We made the most of the golden light before it sunk below the horizon. Because of the wind, we took cover behind one of the massive dunes to light the smoke bombs.

Amber purchased a few different colors for us to experiment with; blue, purple, green and white. We tried out all of them. (Thanks to Andrew for running around like a little kid to change the direction of the smoke!) 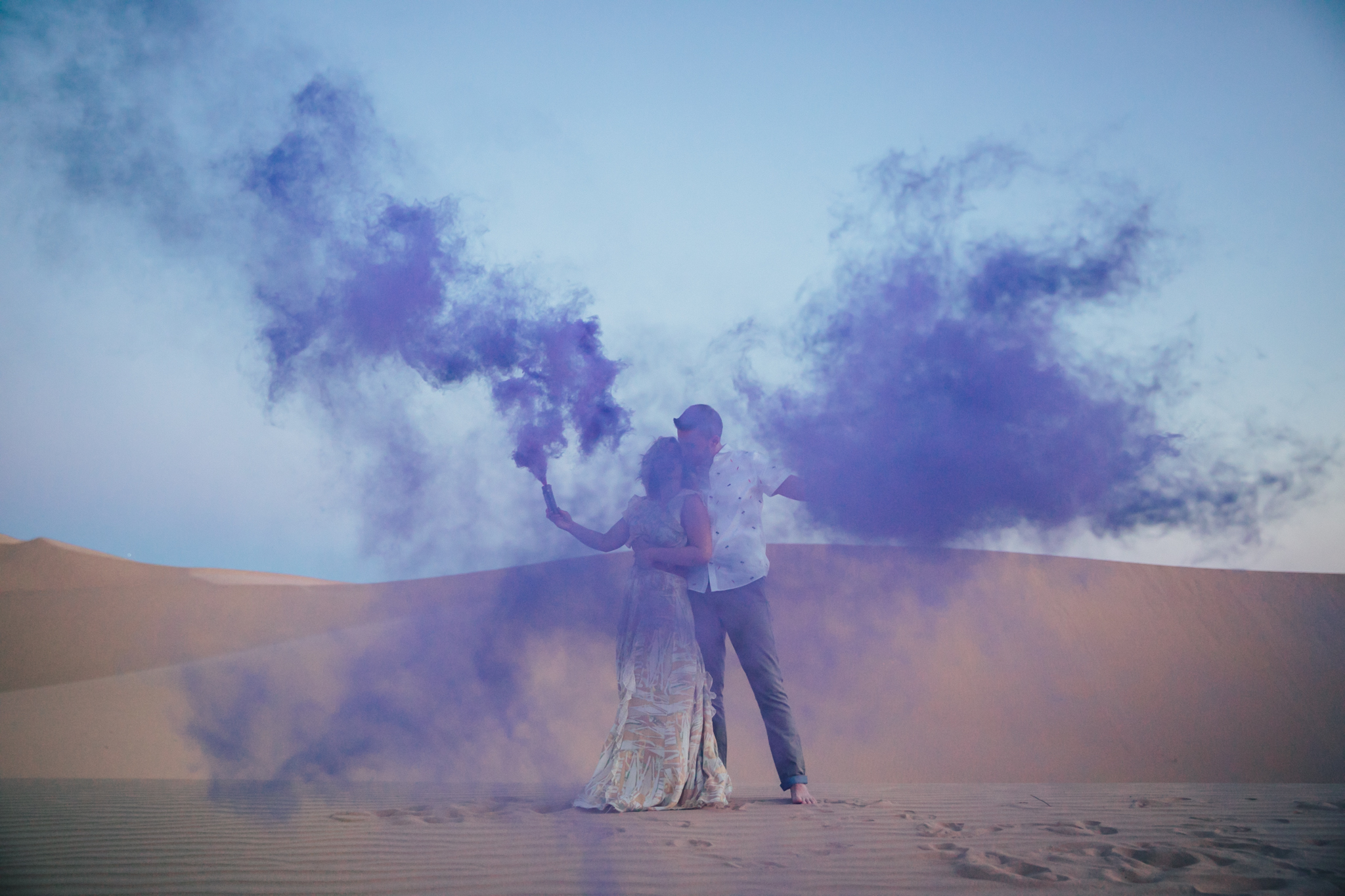 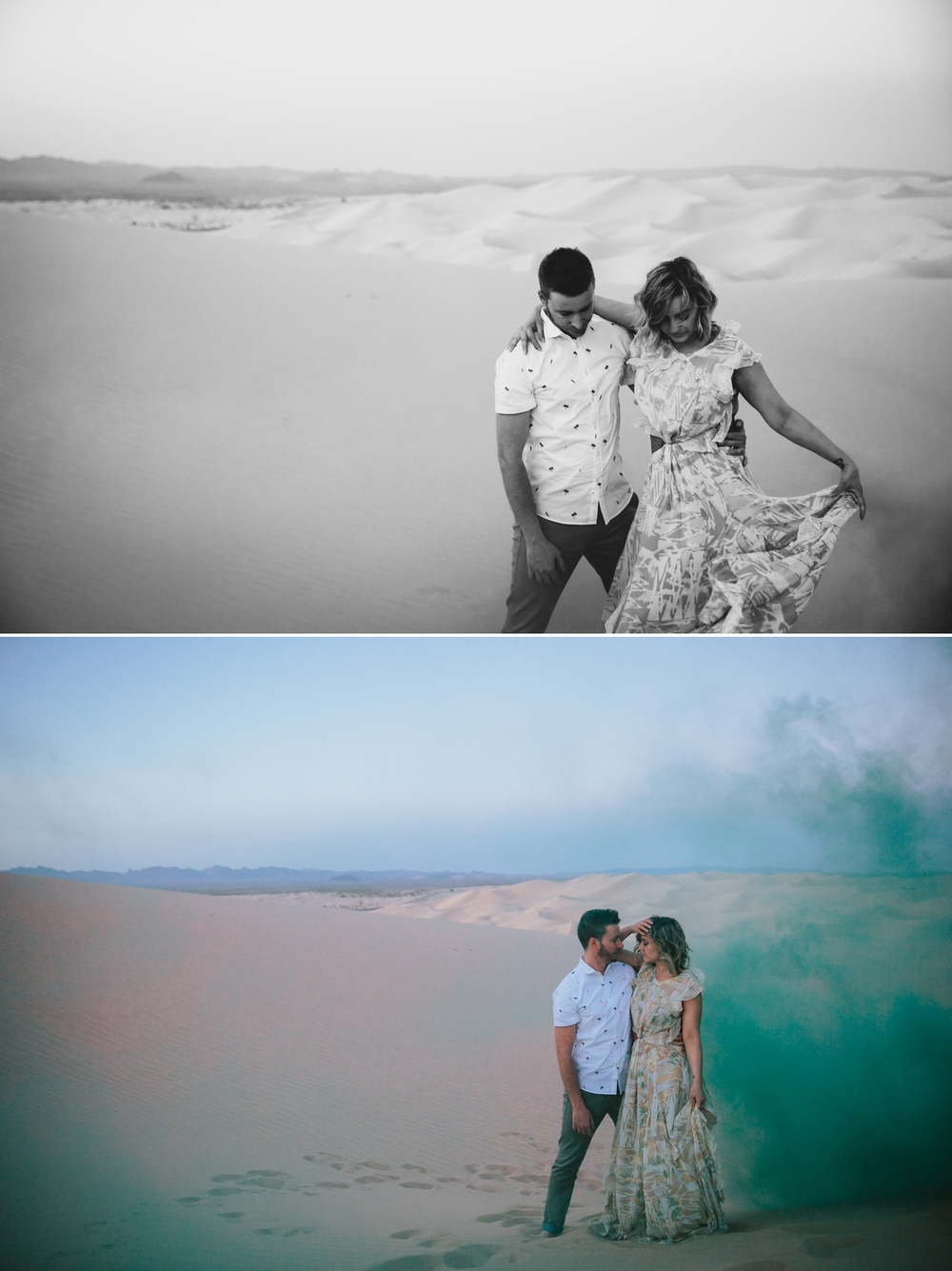 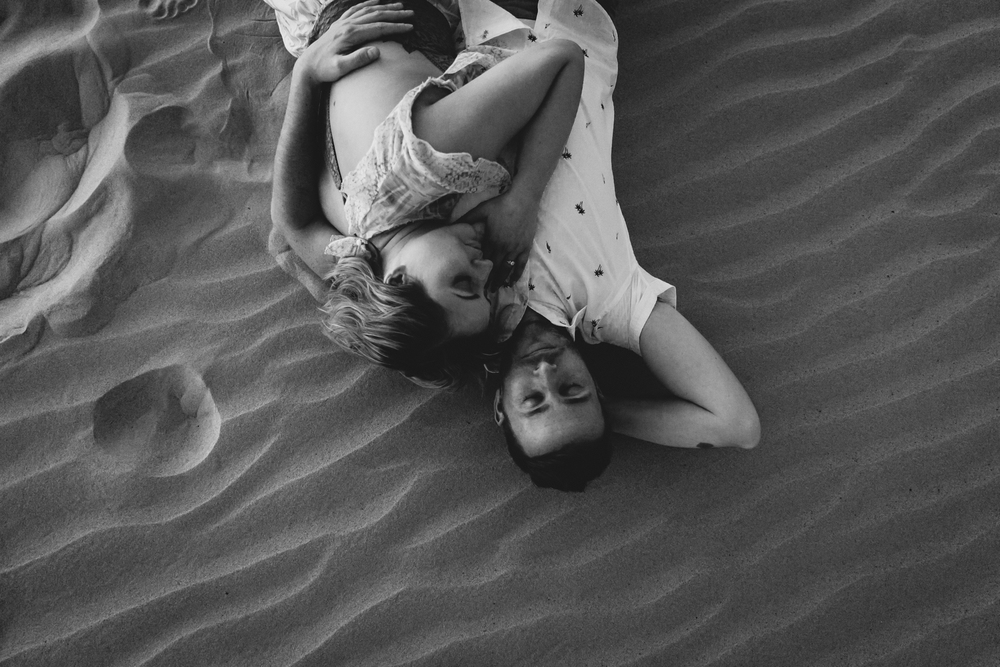 We finished up with the smoke bombs and started the tiring trek back to the car. When we reached the lot, there was still a glimmer of light on the horizon. Amber and Jason cracked open two mini cans of champagne and toasted to a long but very successful day of shooting.

I am so excited to be joining Amber and Jason on another adventure to Montego Bay in Jamaica for their wedding day! Cheers to you both.

If you love this Glamis sand dunes engagement, I recommend checking out Austin & Kailee or Loraine & Kyle’s session too. 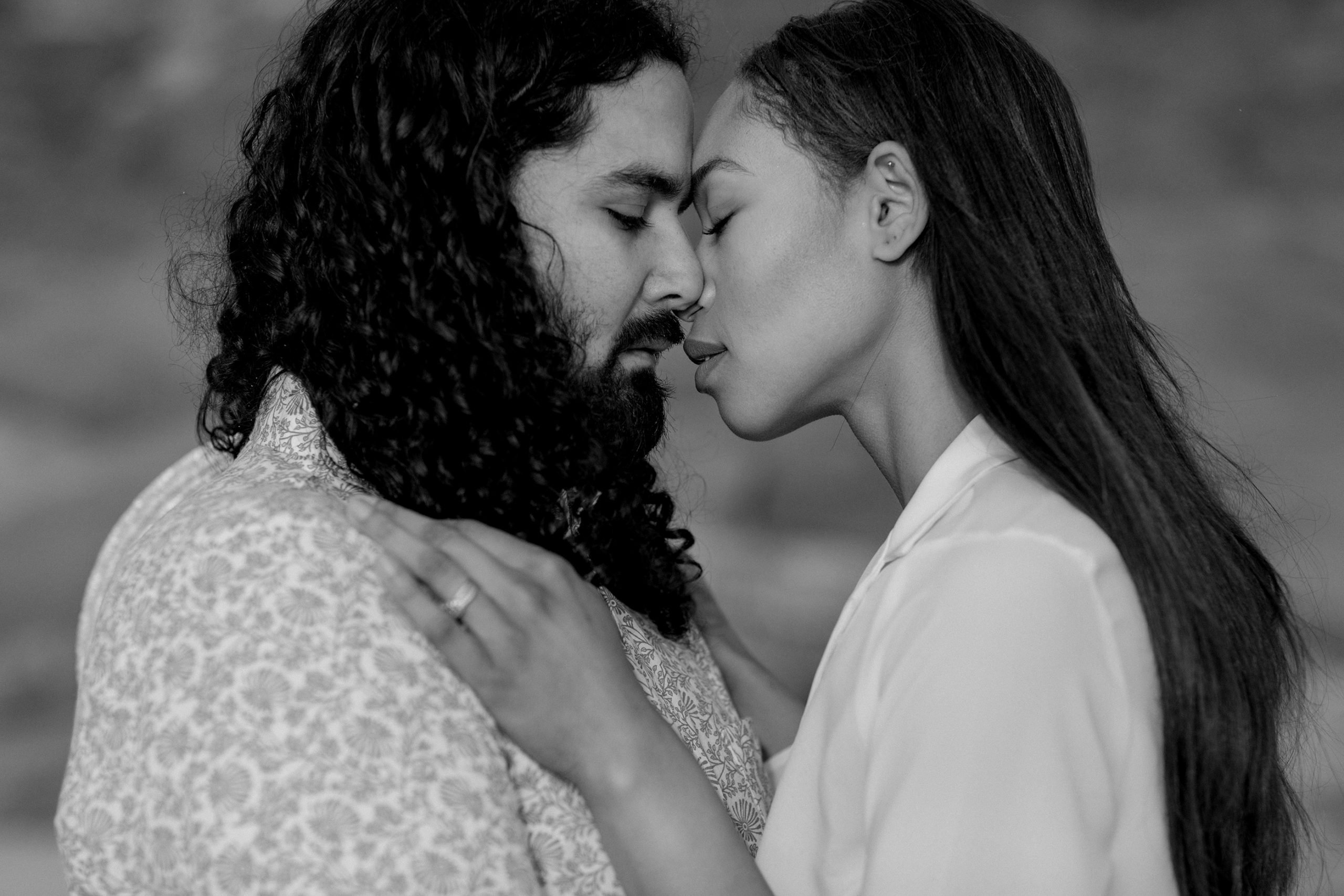 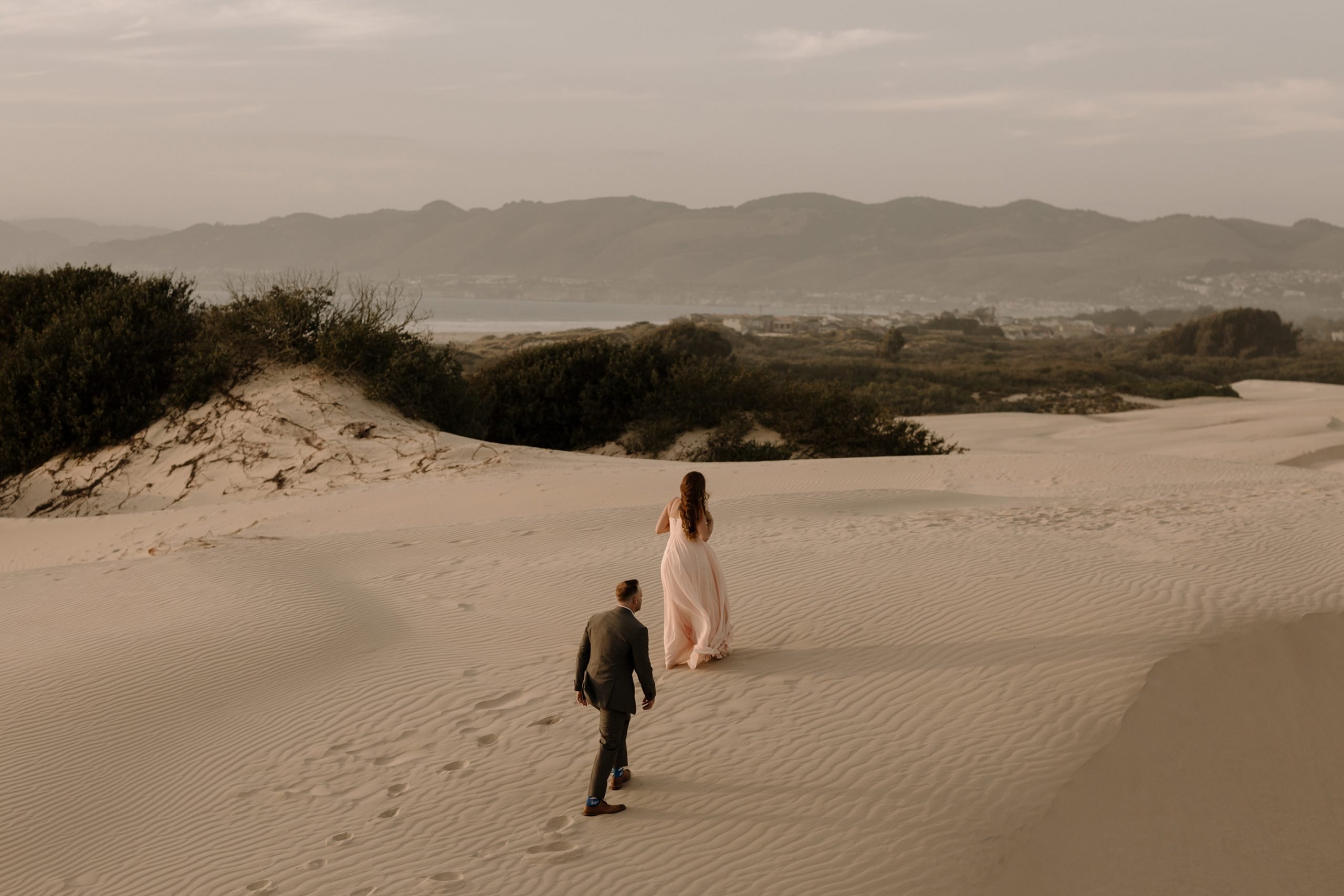 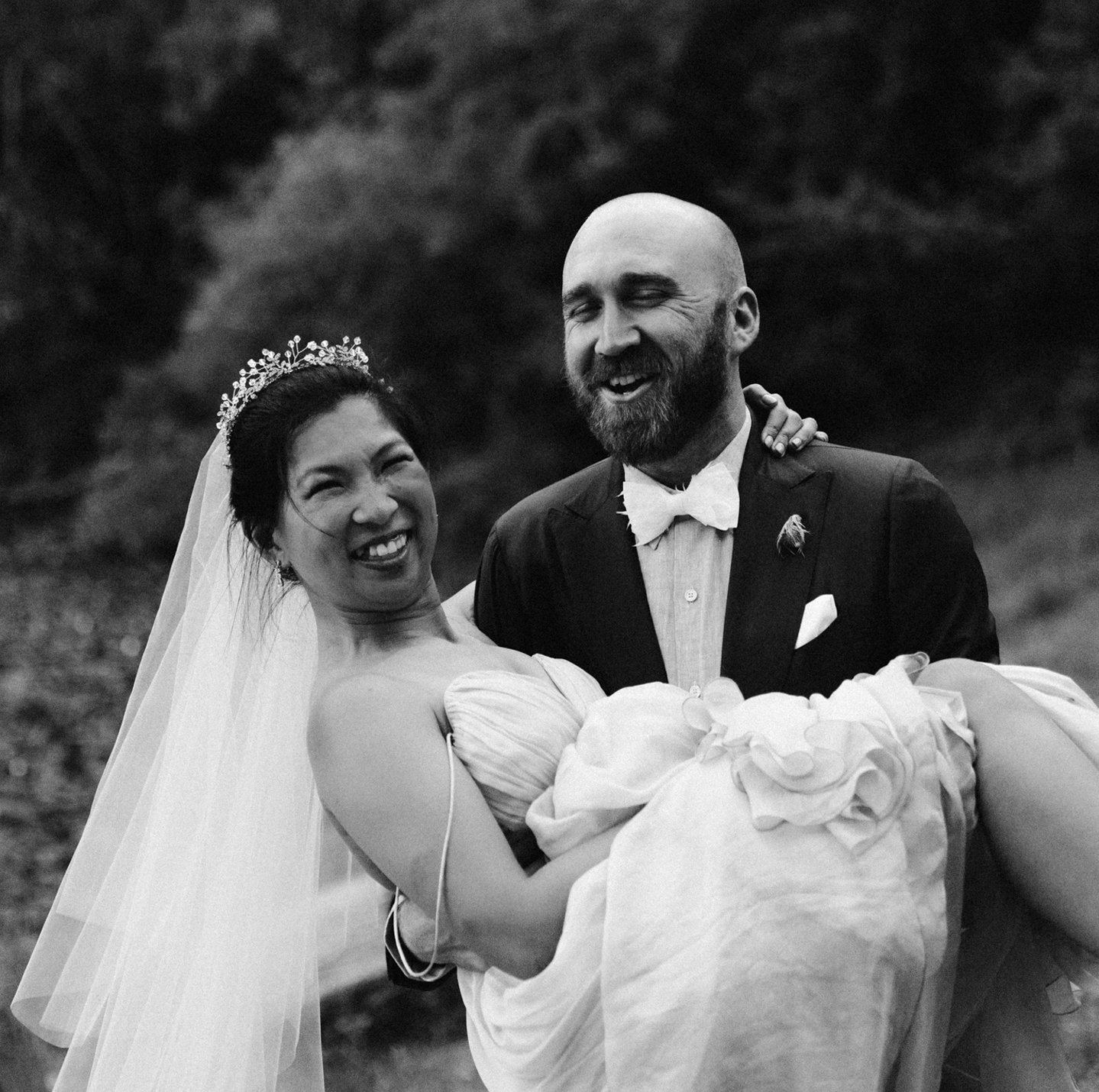 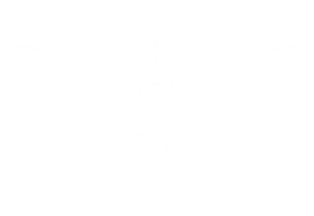